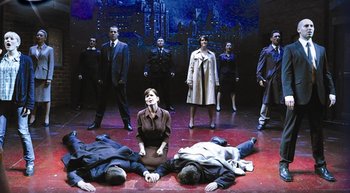 Blood Brothers is a musical written by playwright Willy Russell, about twin brothers—Mickey and Eddie—who are Separated at Birth by their mother, Mrs. Johnstone, who can't afford to raise them both, and her barren employer Mrs. Lyons. They are brought up in two vastly different environments, on opposite ends of the social spectrum. As children, they meet and become best friends, never finding out they are brothers until the day of their untimely demise.

Russell is not a trained musician at all, but wanted to write a musical to call his own, and wanted it to be purely his, not a collaboration. It has become one of the most popular and long-running shows in West End history.