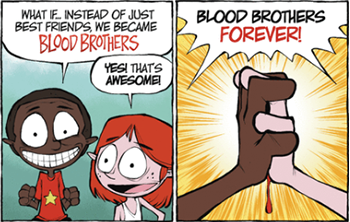 "For he to-day that sheds his blood with me shall be my brother."
— King Henry V, Henry V
Advertisement:

Where two people have made a pact with each other. The reasons for this tend to vary, but most often, it's because one or both of them owes the other his life — frequently in battle. From this moment on, they are brothers. Brothers in the sense that they will do anything to protect and, if necessary, avenge the other.

Sometimes this is portrayed with the two taking a Blood Oath, cutting themselves to "mix" their blood. Thus, the trope name. (Don't Try This at Home; these rituals carry a risk of bloodborne infections like hepatitis and HIV in this day and age.)

This trope is very common with Proud Warrior Race Guys, as well as a popular theme in kung fu movies. It's also quite popular in Heroic Bloodshed movies featuring The Triads and the Tongs, who have Blood Brotherhood as a central theme of their organization, best expressed through the 36 Oaths that formal triad members take, which basically boil down to "Do not screw over your sworn brothers, or you will get chopped up by lots of blades." Being criminals, however, Triads and Tongs can be just as prone to backstabbing and betrayal as any other criminal organization, which is especially shown in the grittier cinematic portrayals.

Often, Blood Brothers spend so much time with each other that they're Heterosexual Life-Partners. See also True Companions, for when a group of people, because of circumstance, are as close as real family would be.

For the musical, see Blood Brothers. Compare Fire-Forged Friends, Bash Brothers. A Sub-Trope to True Companions. Note that all examples must include an oath, pact, or other explicit bonding; if it doesn't, it's not this trope.

Worf joins the House of Martok

Martok extends his thanks to Worf for helping him regain his warrior spirit by asking him to join his house, making them honorary brothers.

Worf joins the House of Martok

Martok extends his thanks to Worf for helping him regain his warrior spirit by asking him to join his house, making them honorary brothers.