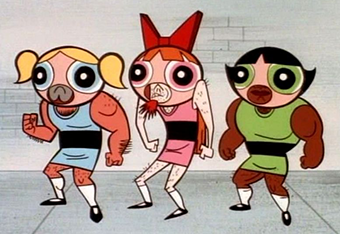 Oh no! The Cape's reputation is in jeopardy! All of a sudden, he's being accused of crimes he's never committed, and the police are after him! He knows that he never committed such vile deeds. Surely this must be the work of an evil Doppelgänger!

After trying to clear his name, the hero finally finds his impersonator, who... doesn't really look that much like him. For starters, his insignia looks like it was made of cardboard, his costume is black, and, of course, he has that goatee. And don't even get started on how he renders the hero's catch phrase.

In a nutshell, this is when the hero's Evil Twin or other evil lookalike doesn't look that much like their duplicate at all. It seems that the only reason anyone could possibly have mistaken one for the other is because the entire populace had just been handed the Idiot Ball. In extreme cases, the doppelganger never actually intended to fool anyone: they just looked vaguely similar, so people mistook one for the other anyway.

This trope is often used for comedy. When played seriously, this can be a case of Viewers Are Morons: While subtle differences in appearance are both expected and useful for the viewer, it can be insulting when the similarities between them are few and far between. If you have to ask yourself, "Wait, how could you have possibly mistaken one for the other?" then it's probably this trope.

Compare Paper-Thin Disguise. See also Costume Copycat and Alleged Lookalikes. See Hugh Mann when a non-human impersonates a human with too much ease.