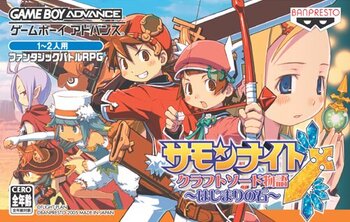 Summon Night Craft Sword Monogatari: Hajimari no Ishi introduces the ability to create arrows. The player can also now to play as their summon beast.

The game was a japanese exclusive title, due to it being a late-release title for the Advance and Atlus moving on to localize Nintendo DS games instead. Until Christmas 2021, that is, when a Fan Translation patch has been released to the public.