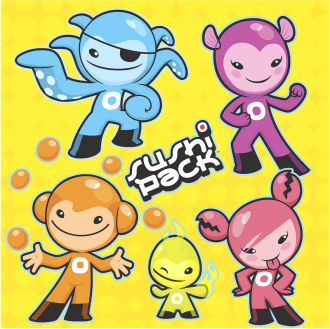 Sushi Pack is a children's Saturday morning cartoon featuring a team of items from a sushi menu, jolted to life thanks to a bolt of lightning. The Pack consists of Tako (octopus), Maguro (tuna), Kani (crab), Ikura (salmon roe) and Wasabi, who together battle evildoers and learn life lessons. They live in an organic donut shop with their human friend and mentor Ben. Despite the superhero element of the story, violence is used only as a last resort. The show is produced by American Greetings, DiC Entertainment (notable for being the final cartoon they ever created), and Tom Ruegger.