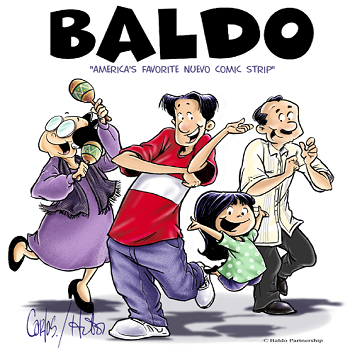 Baldo is a newspaper comic written by Hector Cantu and drawn by Carlos Castellanos.
Advertisement:

The comic centers around the title character, Baldomero "Baldo" Bermudez, a Hispanic teenager who works at an auto parts store and dreams of one day owning a lowrider. Other main characters include Baldo's little sister Gracie, his widower father Sergio, his great-aunt Tia Carmen, and his best friend and Side Kick Cruz.

The comic is kind of like a Latino version of Zits, with maybe a little bit of FoxTrot thrown in for good measure.

Got a animated series for a little bit, but only on Telemundo and in Spanish. If you've never heard of it, it only lasted a season and extremely hard to find any footage of nowadays.

This strip contains examples of: