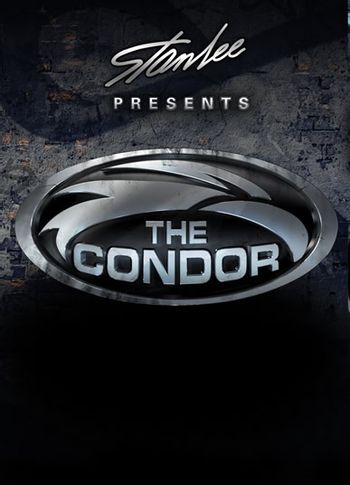 The Condor is an animated superhero film released in 2007, whose title character was created by Stan Lee. The story centers around Tony Valdez, a Latino teenager, professional skater and the son of two wealthy scientists, who are on the verge of a new breakthrough in nanotechnology. However, everything seemingly goes awry when Tony's parents are killed in a (not-so-accidental) car crash and he is attacked and beaten, leaving his legs permanently broken and him supposedly unable to walk again. But here comes science to the rescue! His closest friend, Sammi (who secretly loves him) had studied his parents' research and comes up with mechanized leg braces, which inject him with nanobots and enable him to walk again. She also builds him an unbelievably high-tech skateboard and a personalized helmet, with a heads-up display visor. With all this in tow, he becomes The Condor and sets about finding out the truth about his parents' deaths, and putting a stop to plans by Nigel Harrington (his parents' former business partner) and the assassin Taipan, to use their research for villainous intent.

So basically, we have a Latino teenager, who is a cripple and yet a skateboarding superhero.