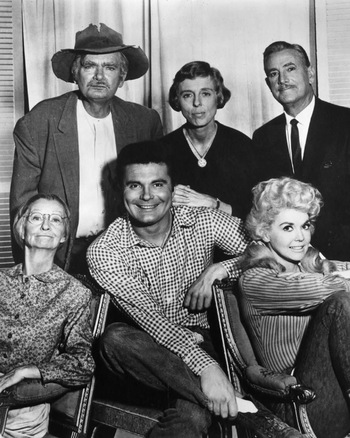 "Y'all come back now, y'hear?"
Come and listen to my story 'bout a man named Jed
A poor mountaineer, barely kept his family fed
And then one day he was shootin' at some food
And up through the ground come a bubblin' crude
Oil, that is. Black gold. Texas tea.

Well, the first thing you know, old Jed's a millionaire
The kinfolk said, "Jed, move away from there!"
They said, "Californy is the place you oughta be!"
So they loaded up the truck and they moved to Beverly...
Hills, that is. Swimmin' pools. Movie stars.

THE BEVERLY HILLBILLIES!
— "The Ballad of Jed Clampett", the show's Expository Theme Tune written by Paul Henning and performed by Flatt & Scruggs with the Foggy Mountain Boys
Advertisement:

A Sitcom, produced by Filmways and airing on CBS from 1962–71, about a rural Ozark-mountain family called the Clampetts, who, after oil is discovered in their swamp, become fantastically rich and move to a mansion in Beverly Hills, where a greedy banker tries desperately to keep their money in his bank, which means keeping the Clampetts happy in the foreign environment of Beverly Hills while simultaneously keeping the city's other residents from driving the Clampetts away.

A great cast is aided by deceptively smart writing from creator Paul Henning, for a series which — contrary to latter-day perception — actually had great respect for the mountain people it portrayed. (Henning was from Missouri and knew such simple yet honorable and proud people in his youth.) In particular, the show's earlier black-and-white seasons subvert the "dumb" hick stereotype to good comic effect by depicting patriarch Jed Clampettnote No relation to that other Clampett (played in a typically low-key performance by Buddy Ebsen) as being obviously a lot smarter than city-dwellers assumed, always getting the better of con men. With the exception of Jethro, the rest of the Clampetts were never portrayed as stupid either, only unfamiliar with their Beverly Hills environment. And in another subversion, the banker Milburn Drysdale (Raymond Bailey chews the scenery gleefully in most of his scenes) was actually a friend to the Clampetts, whom he genuinely liked, and never attempted to swindle them despite his greedy persona.

Incredibly successful, spending its first two seasons as the #1 show on television and its first eight seasons in the Top 20, the show eventually fell victim to the so-called "Rural Purge" from CBS, which sought to improve its viewer demographics by eliminating shows from its schedule that were deemed to have too much of a "country" or southern flavor. In other words, the series was canceled despite high viewership because it had the wrong viewership. (Though considering that Irene Ryan ended up dying only two years after the show's cancellation, it would likely have ended on its own after that point anyway.) The series lasted from September 1962 to March 1971, with a total of 274 episodes over nine seasons. A reunion movie written by Henning, Return of the Beverly Hillbillies, aired in 1981.

The Film of the Series was made in 1993, to mixed reviews. Directed by Penelope Spheeris, previously known for such films as Hollywood Vice Squad (1986) and Wayne's World (1992), the film focuses on the attempt of new characters Woodrow Tyler (Rob Schneider) and Laura Jackson (Lea Thompson) to con the Clampetts out of their money.

The cast consisted of:

The Beverly Hillbillies provides examples of:

Well now it's time to say goodbye to Jed and all his kin
An' they would like to thank you folks for kindly dropping in
You're all invited back next week/again to this locality
To have a heapin' helpin' of their hospitality
Hillbilly, that is.
Sit a spell. Take your shoes off.
Y'all come back now, y'hear?