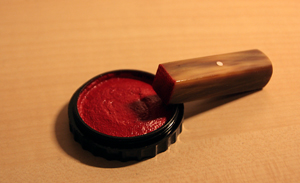 A personal seal with red ink pan
A person receives a package or is filling out a contract. However, there's a delay, because they can't find their Personal Seal. No, not an animal.
Advertisement:

In Chinese and Japanese law, one needs a stamp to "sign" documents in one's name—"signatures" as Europeans know them are an impossibility as the Chinese alphabet is much different than the Roman one. Also called a "chop", one's stamp must be registered with the authorities before it is officially recognized. These stamps, referred to (by the Japanese) as hanko, or inkan, are used with red ink to mark a document.

The inability to locate one's inkan can be a delaying action to build tension or comedy, as appropriate. Alternatively, a person can accidentally stamp a document far more easily than they might sign one, leading to unintended results.

The practice was once common among European nobility and royalty (who at some points in history could have been illiterate, so could not literally sign documents, and as such needed some other way to give them their "seal of approval"), specifically through the use of signet rings to impress a personal seal into wax bindings on messages. (Wearing your personal seal on a ring also prevents the usual application of this trope, conveniently enough.)

While wax seals with signet imprints are a good precaution against a forged document, they are not foolproof. The signet may have been copied, the ruler may have been forced to make the impression, or an official (or a spy) may have used the signet without the owner's permission. In Real Life, the last tactic was used in Japan by adult children of elderly people, who used their dead parent's chop to sign for the parent and defraud their estate.