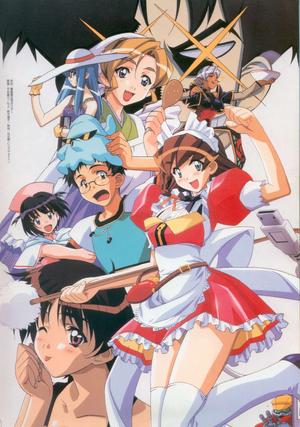 Hand Maid May is an eleven episode comedy anime series released in Japan in 2000.

It centers on the adventures of 19-year-old engineering student and hopeless nerd Kazuya Saotome and a hand-sized robotic Cyberdoll named May that Kazuya accidentally orders from the Cyberdyne Corporation website while trying to fix the damage caused by a computer virus. May is programmed to serve Kazuya's needs and desires, but must be plugged into Kazuya's computer at night to recharge her batteries because her standard charger was damaged when he first received her.

Further complications develop due to May, the first being his inability to pay for her. This causes Kazuya's rival Nanbara to try to take May away with the aid of several Cyberdyne Cyberdolls (all of whom wind up falling for Kazuya).

This was followed by the three-episode 2003 OAV spinoff series, Hand Maid Mai (note different spelling), which is about Hideo Ozu, a struggling adult film editor, who received three Cyberdolls named Mai, Ai, and Mie, who resemble actress and childhood friend, Mai Kurosawa, at different ages, with Mai as the oldest, Ai as the middle aged, and Mie the youngest. It also features cameos by Kasumi and Sara, dubbed Cyberdoll Sara Mk. II. Despite all three episodes being completed, only the first episode was released, as the series' original distributor, Five Ways, went bankrupt in mid-2003.

Cyberdoll Rena has the ability to produce supersonic screams!

Cyberdoll Rena has the ability to produce supersonic screams!