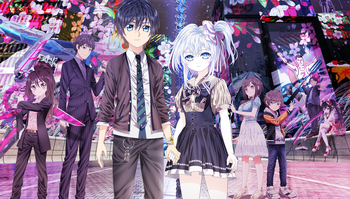 Hand Shakers is a 2017 12-Episode Anime by studio Go Hands. In the year AD20XX, a busy student and skilled mechanic named Tazuna accepts a repair request and heads off to a university's research area. There he sees a girl asleep in bed, Koyori. When Tazuna hears a mysterious voice, he grasps Koyori's hand and they appear in another world, Ziggurat. Immediately, Tazuna and Koyori have to defend themselves from attack by other Hand Shakers. Those who hold hands and fight together with weapons from deep within one's mind called "Nimrod". In order to grant their own wishes, many Hand Shakers fight each other in competitions to reach the top, where they can meet this God and defeat it.

Both the series and its sequel are notable / infamous for their extremely garish and bizarre visual style.