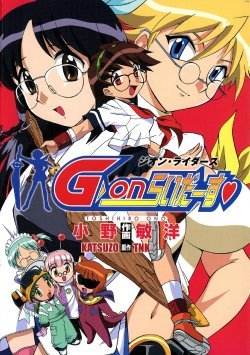 G-On Riders is a 13 episode (with a '14th episode' Ecchi OVA) Fanservice filled Meganekko Anime about the adventures of Yuuki Kurama, Sela Arashiyama and super shy Yayoi Hoshikawa as they fight off alien attacks with the combined powers of friendship and Magical Girls with the unusual Power-Up of putting on glasses (though they stop bothering to take them off about halfway through the series). In support of their adventures are Unlucky Everydude/Badass Normal Ichiro, the school nurse Mio Sanada, who is also the one who developed the girls' power-source, a pair of Bridge Bunnies and the Casanova Wannabe, with a crush on the doctor, School Principal.

Has nothing to do with Go-Onger or Kamen Rider.