Manga / Destiny of the Shrine Maiden 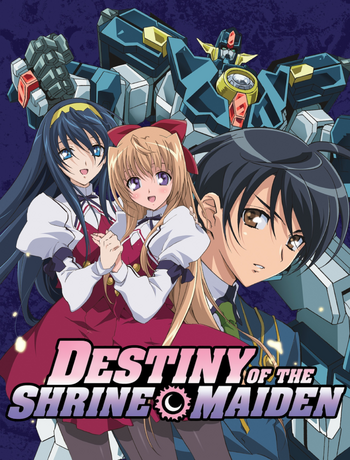 It was one of those days for the innocent Himeko Kurusugawa: wake up late on your sixteenth birthday, rush to get ready and get to school... Then an ancient evil wakes up with designs on world destruction, a couple of anthropomorphic robots trash the school dormitory, and life as you've known it is over.

On top of all this, Himeko is also the Hi no Miko (Priestess of the Sun) one of a pair of miko (shinto priestesses), destined to summon the Sword God Ame no Murakumo no Tsurugi to defeat the evil god Yamata no Orochi.

Himeko is taken in after the destruction of the dormitory by her friend and fellow priestess Chikane Himemiya (the Tsuki no Miko, or Priestess of the Moon), and tries to get on with her life as much as possible even as the two girls attempt to learn the ritual which will summon Ame no Murakumo and come under periodic attack by the eight "necks" of Orochi, henchmen of the evil god, who run the gamut from serious (Tsubasa) to traitor (Tsubasa's younger brother, Souma Oogami, who fights on the side of the Priestesses) to downright goofy (Nekoko, the catgirl, who levels a fifty square kilometre region of coastal Japan for the lulz).

Destiny of the Shrine Maiden (Kannazuki no Miko in Japanese, lit. "Shrine Maidens of the Godless Month") is a manga created by Kaishaku (of Steel Angel Kurumi and UFO Princess Valkyrie fame) that originally ran monthly in Shonen Ace from 2004 to 2005 and was compiled into two volumes. However, the series is far better known by its animated adaptation, produced by TNK note  who also produced the anime adaptation of the above mentioned UFO Princess Valkyrie . The series is considered somewhat of a cornerstone for the Turn of the Millennium Yuri scene.

Though Destiny of the Shrine Maiden attempts to fool viewers into believing that it could be a schoolyard drama (which it is, to an extent), and then a mecha action show, the truth is that it is, essentially, a love story. (Actually, a rather simple Love Triangle, wherein Himeko has some feelings for both Chikane and Souma Oogami, but initially believes that those two are a couple, while both of them hold romantic feelings for Himeko). The strange blend of seriousness and humor in the series makes for a very "love it or hate it" reaction from viewers.

As a point of interest, the term Kannazuki in the Japanese title is the name of the tenth month in the old, thirteen-month Japanese calendar, and literally means "The Godless Month". (Japan now uses the Western calendar, with all-new month names.) In mythology, this is the month where all the gods of the pantheon gather for their yearly meeting in Izumo — and thus, for the purposes of the series, not out in the world to keep Orochi from making a nuisance of himself.

As a humorous aside, playing on kannazuki as the 10th month, Destiny of the Shrine Maiden began airing in October. Whether this was intentional or not is unknown.

After the original Geneon release of Kannazuki No Miko went out of print, Sentai Filmworks reissued the series in 2009 under the title Destiny Of The Shrine Maiden.

Alternative Title(s): Kannazuki No Miko, Destiny Of The Shrine Maiden