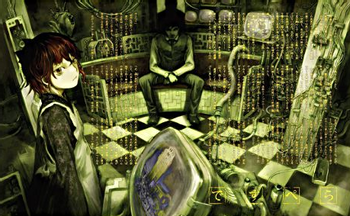 Despera is an upcoming anime by the creators of Serial Experiments Lain, written by Chiaki J. Konaka and featuring character designs by Yoshitoshi A Be. It was originally to be directed by Ryūtarō Nakamura. A companion light novel serialization relating to the anime was published in Japanese magazine Animage, with thirteen chapters released in serial form between July 2009 and July 2010. The complete novella was published as a single volume on April 28, 2011, and included new story content and illustrations.

The story is set during the Taisho era and centers around a 12-year-old girl with a familiar hairstyle, named Ain. She lives in the cellar of the Ryōunkaku, Japan's first skyscraper, and builds devices far ahead of the current time period, including computers with cathode ray tube display monitors and typewriter keyboards. Her inventions are funded by a mysterious man called Takeshita, who claims he can see the future in Ain's computer screens. Other people who take an interest in Ain and her inventions are Enoshi, a military officer sent to investigate some unexplained electrical currents, and an aristocrat named Kimiyasu Fuenokōji. Living with the latter is Barbara Andrei, a Russian aristocratic refugee from Harbin

The series is currently in Development Hell due to the health problems and later passing away of the director on June 29, 2013. As of 2015, ABe announced that they will proceed with a new director