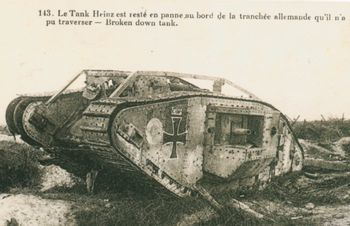 This week on Pimp Mein Panzer: Heinz, the revolutionary new Mk I Tank from Britain!
"Just once, I'd like to destroy a ship we didn't pay for!"
— Admiral Hurkk, Star Wars, on Rebel Nebulon-B frigates

An extremely common plot in fiction is commandeering enemy equipment and turning it against its former owner as soon as possible, often with the thief in command of the hardware. The commandeered materiel will often then remain in continuous service rather than being reverse engineered and mass produced.

This trope is ubiquitous in works of naval fiction that are set in the age of Wooden Ships and Iron Men. This is because sailors were awarded prize money for capturing enemy ships. Captured enemy ships would often be incorporated into the captor's own navy (often under their original names, as it was considered bad luck to change the name. HMS Guerriere is a good example). See The Other Wiki for more information

. Because Space Is an Ocean, science fiction works will sometimes use the same concept with spaceships.

Super-Trope to Grand Theft Prototype, which is the Super Prototype or otherwise "super weapon-y" version of this trope. See also Hoist by His Own Petard, Enemy Exchange Program, and Death by Irony. Is not a case from the Ace Attorney series.