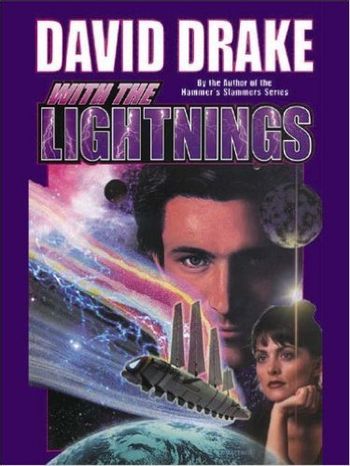 Space Sailing has never been so much fun.
"But Daniel," Adele said, struggling to understand a situation devoid of logic. "Their ships are bigger and newer and there's more of them. Surely Admiral Chastelain knows that?"
"Yes, Adele," Daniel said, "But he also knows that we're the RCN. No Alliance commander ever forgets that."
"Ah," Adele said. "Yes, I understand."

David Drake's RCN (Republic of Cinnabar Navy) series is loosely based off the 18th century British navy, complete with spaceships that travel through hyperspace using sails. However, the sails are handled fairly realistically: stripping a ship's sails with a plasma cannon is a quick and easy way to keep it from escaping into hyperspace, the sails need to be furled and stowed before entering an atmosphere, and when deployed, interfere with the ship's realspace maneuvering and combat.

In the same way that Honor Harrington is Horatio Hornblower IN SPACE!, the RCN books are Aubrey-Maturin IN SPACE!, with Daniel Leary in the role of Jack Aubrey and Adele Mundy as Stephen Maturin (only with her being the ship's comms officer rather than its surgeon).

From the author's note from The Way to Glory, fourth book in the series: "The general political background of the RCN series is that of Europe in the mid-eighteenth century, with admixtures of late-Republican Rome. (There's a surprising degree of congruence between British and Roman society in those periods.)"

The books so far,