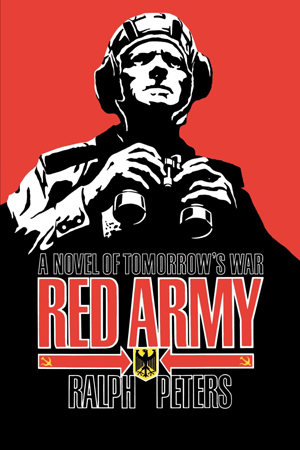 A 1989 novel by Ralph Peters, often counted among the techno-thriller genre thanks to its subject matter — a Soviet invasion of Western Europe. Unlike other techno-thrillers, however, Peters wrote the entire story from the Soviet point of view, and has the Soviets actually win.

As the story opens, World War III has already started (Peters never does mention what started it) and the Red Army under General Malinsky is about to attack across the plains of northern Germany. What follows is the offensive operation that NATO so feared during the Cold War; the mechanized Soviet armies split the alliance's front and pour across northern Germany too fast for their squabbling high command to react in a timely fashion before it's too late.

Like Red Storm Rising, it’s a highly educational read, and is surprisingly easy going since Peters avoids geeky details (he talks about 'tanks' and 'anti-air units' instead of 'T-80s' and 'ZSU-23-4s') and focuses squarely on the characters, every one of whom is properly fleshed-out and three-dimensional. Unfortunately, it had the misfortune to be released at the end of the Cold War and thus for many became Hilarious in Hindsight when the mighty Soviet Union broke up and the Gulf War occured. The use of outdated, export-quality equipment by Iraqi forces in the latter 'proved' to many that the USSR's emphasis on planning and organisation would have counted for nothing in the face of NATO's marginally-superior weaponry note  Ignoring the massive organisational advantage of the U.N. forces over Iraqi ones in that conflict, not to mention the air superiority and element of strategic surprise caused by the U.N. forces' unexpected armoured-mechanised thrust through southern Iraq to encircle Iraqi forces in Kuwait - rather than a frontal attack that restricted the fighting to within Kuwait as the Iraqis had expected, and Peters was accused of overhyping the USSR's capabilities.

Peters acknowledges in his afterword that his novel portrayed a 'best case' scenario for the Soviets which showcased their strengths (careful, skillful planning) and NATO's weaknesses (reliance on improvisation, severe internal divisions). He's also said that he wrote the novel in part because all the famous World War III technothrillers of the time portrayed best-case scenarios for NATO in which Soviet forces were forced to improvise and fight in unusual situations (only to be thwarted by small bands of intrepid spies/heroes). In this respect it is arguably 'harder' fiction than the latter, as it portrays a mundane/typical WWIII scenario rather than an exciting/fantastic one.

While fans of NATO's military technology are quick to claim that Red Army 'fails the history test' - because Soviet smarts really were on the verge of being outmatched by NATO (weapons-technology-)brawn in 1989 - it's an excellent human drama that devotedly details the workings of a modern army.