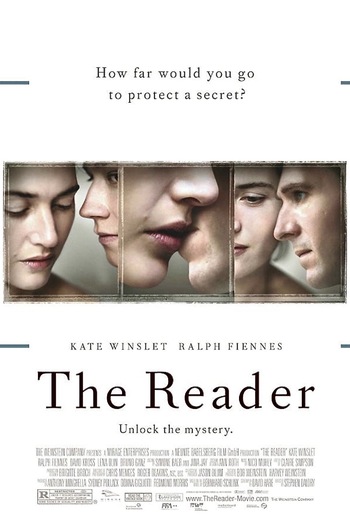 A 1995 German novel by Bernhard Schlink, The Reader, aka Der Vorleser, was adapted into a 2008 film directed by Stephen Daldry and starring Kate Winslet and Ralph Fiennes.

In 1995 Germany, lawyer Michael Berg (Fiennes) meets his daughter Julia, who he hasn't seen for a while since he and her mother divorced. Before that, he recalls his sexual awakening as a teenager in 1958 when he began an affair with tram conductor Hanna Schmitz (Winslet). Their sexual liaison is highlighted by him reading literary classics to her, but the affair abruptly ends when she moves out of town.

In 1996, they meet again, with him as a law student and she as a defendant on trial for war crimes. It turns out that she was a prison guard for the SS, and was present with several other female guards when they let 300 Jewish women and children perish in a church fire. It also turns out that she hides something important about herself, a factor which would clear her of full responsibility for the incident. Will he help her get off?

The film was nominated for five Academy Awards and won Kate Winslet a long-sought Best Actress award, but also suffered some Hype Backlash from people who did not share the movie's perceived sympathy for an SS death camp guard. One critic retitled The Reader as "Boohoo, I Bonked An Illiterate Nazi".

There's also the issue of it being nominated for Best Picture over WALL•E and The Dark Knight, both of which were more critically acclaimed than this one (this in particular may have spurred the Academy to expand the number of Best Picture nominees starting the following year).

The Reader features examples of: