Literature / Realm of the Elderlings 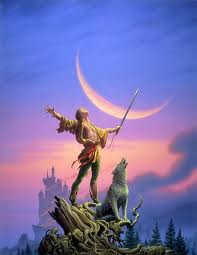 Fitz and Nighteyes, by Michael Whelan
The Realm of the Elderlings is the universe in which the majority of Robin Hobb's work takes place. So far it is comprised of the following sub-series:
Advertisement:

There are also the related stories "Homecoming", "The Inheritance", "Words Like Coins", "Blue Boots" and "Cat's Meat" and the novella The Willful Princess and the Piebald Prince.

The various trilogies and stories follow different characters and are written in somewhat different styles, and could be read independently of one another. The three trilogies about Fitz form one group, with the other two series being more loosely linked to one another. Nonetheless, all five series form different parts of a single overarching narrative and characters from one series will reappear in others to make cameos or as supporting characters; and the books thus make the best sense when read in the order above. Though no one character appears in every book, the central characters of the series might be said to be Heterosexual Life-Partners FitzChivalry Farseer, a royal bastard trained to be an assassin, and the enigmatic Fool, a mystic prophet with an ambiguous agenda.

Although plenty happens over the course of the series, compared to many fantasy series the books are primarily character-driven and focus to a great extent on the concerns, motivations, feelings and conflicts of their main characters, with a common theme being the conflict between characters' own desires and their duties to their King or their people, their friends, or their families (or sometimes all three). Characters frequently change over the course of the books. Whilst the series does have definite heroes and villains, characters are rarely either entirely noble nor irredeemably evil and just as the villains have backstories that go some way to explaining their motivations, the heroes too are often motivated by violence and vengeance (or for the Greater Good) into doing things that aren't strictly heroic. The series has plenty of dark moments, but nonetheless on the whole does lean towards the idealistic side of the scale.

The series walks the line between High Fantasy and Low Fantasy without ever clearly falling into either camp. The medieval setting, plots revolving around the rise and fall of Kingdoms, magic, dragons, prophecies about the fate of the world etc. are all archetypical of high fantasy, but the focus on individual human characters and their internal problems, as well as the moral ambiguity discussed above, are more typical of low fantasy.

The first trilogy should not be confused with the novel Farseer, a Warhammer 40,000 novel by William King of Gotrek & Felix fame.

Tropes not exclusive to any of the series:

open/close all folders
The Farseer Trilogy
The first trilogy follows the story of the royal bastard of Prince Chivalry, Fitz. As a young boy he is brought to the heart of the Six Duchies, Buckkeep, and to its court, where most of the story takes place. As a bastard, Fitz is trained in the only real way he can serve his country: as an assassin. He aids the King and his King-in-Waiting in protecting the kingdom both from internal threats and an external threat: the Outislander pirates, the Red-Ship Raiders.

Tropes found in The Farseer Trilogy:

Tropes found in The Liveship Traders:

Tropes found in The Tawny Man:

Fitz and the Fool
This trilogy begins 19 years after the successful conclusion of Dutiful's betrothal to the Narcheska. Fitz, under the name Tom Badgerlock, has retired to Withywoods to a happy life with Molly. As far as the outside world is concerned, he's Holder Badgerlock, managing Withywood on behalf of his wife's daughter, Skillmistress Nettle. The pair are settling into a comfortable middle age and look forward to a happy senescence, when things get a little strange.

Tropes found in Fitz and the Fool: