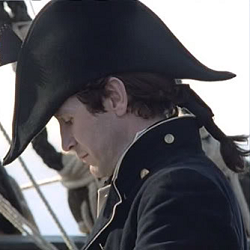 In times past, "long hair" for women meant long enough to sit on. "Short hair" for men, therefore, could get shoulder-length or longer. Sailors and other wanderers who spend long weeks away from ladies and barbers often wore low ponytails to keep their hair out of their way.

Characters who sport a sailor's pony tail are not necessarily Long Haired Pretty Boys, as their lengthy locks are not flowing and feminine. The Sailor's Ponytail is visual shorthand that indicates an adventurous and down-and-dirty character — but not, like Wild Hair, a separation from society altogether.

(Except that longer hair for men was pretty universal in 17th century Europe, and by the early 18th century most men had begun to tie their hair back or wear a wig styled with a 'queue'. It's true that many sailors carried on wearing a long pigtail after short hair had come back into fashion.)

Further, an actor playing a character with a Sailor's Ponytail is often wearing a wig or hair extensions because it can take several months to well over a year for a man with a contemporary short hairstyle to grow their hair long enough for it to be tied into a ponytail. In Real Life, that would be why a man would keep it even in civilization; the intermediate stage, long enough to get into the way but too short to pull back, could be extremely awkward.

Ever-popular hair style and genre/setting indicator for the Wooden Ships and Iron Men.