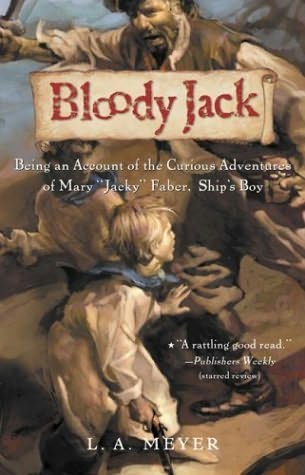 Jacky Faber is a tough, resourceful urchin on the streets of London, capable of really anything you can imagine. Although Jacky's life as a member of Rooster Charlie's Gang is all right considering the circumstances, it's not enough—the sea calls with promises of fortune and high adventure, and Jacky has always wanted to see the Bombay Rat, the Cathay Cat, and the Kangaroo.

There's only one problem: Jacky's a girl.

When an unexpected tragedy forces her to leave her old gang, Mary Faber dons boys' clothes, takes the name "Jack," and joins the Royal Navy as a ship's boy. It's risky, but it certainly beats the bleak prospects of an orphan girl on the streets of London in 1803. From there, she goes on numerous adventures all over Europe, America, and the open sea, makes unlikely friends, and falls in love... but even when everything seems perfect, trouble always manages to find her.

Bloody Jack is a series of twelve young adult novels by L.A. Meyer. They are as follows:

The series is a must-read for anyone who likes historical fiction, adventure, pirates, and genuine plucky heroines. The story is fast-paced and fun to read, but not simplistic in the least—to fully describe the plot would make this page longer than Moment of Awesome. But feel free to break the cast down by trope with the Character Sheet.

Not related to Violence Jack in any way, shape, or form.