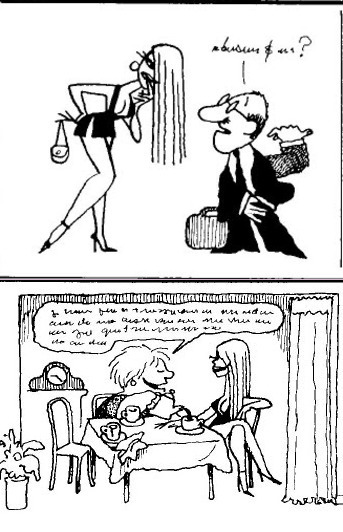 Tommy: How can I fulfill your fantasy?
Sheila: Go paint my house.
— Exit to Eden
Advertisement:

Suppose you have a Hooker with a Heart of Gold. She's probably had a world's worth of men, ranging from unsavory to less savory. But sometimes, either to her relief or to her profound annoyance, she meets one of these.

These men — and they're almost always men — visit prostitutes not to have sex with them, as one would expect, but for some other purpose. Perhaps he's religious and trying to reform her. Perhaps she's too young for the business and he wants to get her out of it. Perhaps he just wants conversation and can't think of another way to get it, or he wants his friends to think he's more promiscuous than he really is. Perhaps he wants information concerning one of her clients. Perhaps he's Transgender or a Sweet Polly Oliver, and doesn't want her to discover this. Perhaps he needs a grunt for something and figures, "If you'll have sex for money, there's not a lot you won't do for money." Perhaps he's a widower who misses the warmth of a woman sleeping next to him. If other characters find out, they will rarely believe that he's not in it for the sex.

This is Truth in Television — in real life, surprisingly common

and known as "emotion work." In Japan there exists an industry called "hostess clubs" where they pay for conversation rather than for sex. See also Enjo Kosai.

This John isn't looking for sex, but rather for a magical woman to fill his life with whimsy.

This John isn't looking for sex, but rather for a magical woman to fill his life with whimsy.