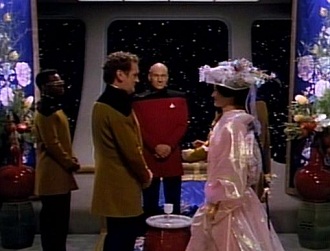 I now pronounce you Mauve Shirt and Wife.
"Since the days of the first wooden vessels, all ship masters have had one happy privilege: that of uniting two people in the bonds of matrimony."
— Captain James T. Kirk,note Later echoed by Capt. Picard and Admiral Ross Star Trek
Advertisement:

So you're in a rush to get married, only you don't want to go through the hassle of standing in line for a marriage license, getting a blood test, and blowing thousands of dollars on an elaborate ceremony. What do you do?

Well, you simply hire out the nearest sea captain (the saltier the better), have him take you in his boat beyond the 12-mile mark and then let him perform your wedding ceremony. After all, you're in international waters. Anything goes, right?

Well... wrong. Captains can perform marriages, but they need a license to do so, just like anyone else would. There are no laws that "automatically" grant captains this right, although you wouldn't know that by watching television, where a sizable chunk of nuptials are performed by salty sea dogs. (Bonus points to the captain if he wears a patch over one eye and reads the vows to the couple in a pirate-y accent.)

(Speaking of pirates, there was actually a wedding aboard a pirate radio ship off Britain in the 1960s - one of the DJs married another DJ's sister - which was of course broadcast live.)

The trope may have originated in the Age of Sail when Europeans would have to travel by ship for months at a time to reach far flung colonies. A couple could meet, court, and marry all while still enroute to their destination. The marriages had to be registered in the port of call, but otherwise were considered fully legal in most seafaring nations.

Can result in an Accidental Marriage. May also be done by The Captain of a Cool Starship.

Contrast Burial at Sea, another ceremony often officiated by captains.