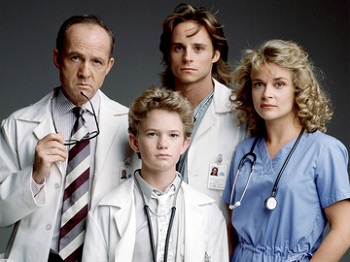 Aren't you a little young to be a doctor?note Yes. Yes, I am.
“So let me recap: Amy is evidently a millionaire, dresses up in a fancy dinner dress, she's a globe trotter, high school drop out, ex-terrorist, highly ranked military official, ghost hunter, a potential gold medal winner in 3 different Olympics of at least 4 disciples each... and not one parent or child service agent in sight. Look at this list. Is there ONE part of Amy's character that makes you point and go, 'Yup! That's a 12-year-old girl alright!'”
— Luke the Fox, Sonic Dissected Episode 6

A character whose age seems inappropriate with their occupation or position given the amount of experience they would need, whether or not their age is actually important within the storyline. Tends to lean to the younger side, resulting in the Teen Genius, Kid Hero. Sometimes, a disproportionate amount of the (especially female) cast is inexplicably under thirty. In benign cases, it's because the writers assume the audience better identifies with characters their own age.

In some cases, an age that is improbable at first glance may actually be Truth in Television. In ages past, life expectancy was shorter and people needed to be capable at a younger age; in fact, studies seem to indicate that adolescence is a modern creation. This has produced a very curious effect where the longer humans live, the longer the age gap of competence tends to widen. It also must be noted that many of the examples below occur in violent settings; people growing up in a warlike environment have no choice but to adapt and learn to survive, and the faster the better. It's a common problem in societies with inherited positions of authority, although usually some adult regent would be appointed until the heir comes of age.

Although in the past, competence, skills, and abilities were more necessary at a younger age (as opposed to the modern convention of serious training starting only at age 18 or so), this convention is often abused for fields where expertise is implausible without years of formal training at a more mature level — for example, a teen already being an expert in modern disciplines that require formal university education as well as graduate level education. There is only so much a kid could learn from his local library. This is often the result of creating a Hot Scientist, with actors in their twenties playing full professors when in reality most people are at least 25 when they first get a PhD.

More rarely this trope works at the opposite end of the scale with characters seemingly inexplicably old for their positions, often as a function of being played by a 'name' actor whose recognition or prestige factor outweighs other concerns. This can be especially obvious in fields that require extensive physical fitness; in real life relatively few frontline soldiers or beat cops will be of retirement age.

For characters whose age seems inappropriate given their maturity (rather than competence), see Wise Beyond Their Years. If the people running a society are improbably young, see Teenage Wasteland, though if only one is, it's A Child Shall Lead Them. If the character is of an appropriate age but the actor is too young, it's an inversion of Dawson Casting; Playing Gertrude is a common case. Can be easily handwaved by making a character Older Than They Look, or even Really 700 Years Old. May lead to Child Soldiers. Contrast Competence Zone.