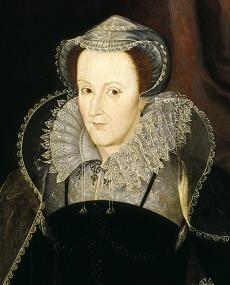 "In my end is my beginning."
"Princes at all times have not their wills, but my heart being my own is immutable."
Advertisement:

Mary I (8 December 1542 – 8 February 1587) of The House of Stuart, popularly known as Mary, Queen of Scots, Queen of Scotland from 1542 to her forced abdication in 1567. She was the only surviving legitimate child of King James V. Because Mary was only six days old when her father, King James V, died, her mother, Marie of Guise, assumed the Regency of the kingdom and arranged her marriage to Francis, heir to the throne of France, who was crowned as Francis II in 1559, only to die the next year.

After Francis's death, Mary returned to Scotland, where her Roman Catholicism made her unpopular in a country that had adopted the Calvinist form of Protestantism. Mostly among the nobility. Mary was successful at first, due in no small part to the advice and support of her illegitimate half brother the Earl of Moray. She was also very charismatic and capable of winning the common subjects to her side when need be. Unfortunately she became infatuated with her first cousin, Henry Stuart, Lord Darnley, a fellow Catholic from Leeds and, like her, a claimant to the throne of England, and married him in 1564 against the wishes of Elizabeth I and more importantly against the advice of every responsible member of the Scottish government. The marriage was a bitter failure — by nearly all accounts, Darnley was both vicious and effeminate, while Mary was widely accused of luxury and adultery, supposedly with her Italian secretary and court musician, David Rizzio, whom Darnley (in league with the Protestant Scots lords) murdered in the Queen's presence in 1566. The couple separated after the birth of James I and Darnley took refuge from his numerous enemies with his father.

Darnley was being treated for syphilis at the time. When he and Mary attempted a reconciliation — Darnley recognizing Mary was the only one who could protect him from his enemies and Mary that she had no honorable way to end her marriage — he was brought to the Old Provost's Lodging at Kirk O'Field. It blew up in February 1567, while Mary and most of her lords were at a wedding party after spending the day with Darnley. Darnley himself apparently escaped the explosion, as he was subsequently found strangled in the garden, with no marks on his body at all. Darnley was due to complete his treatment the next day and subsequently resume cohabitation with the queen.

Popular opinion blamed Mary. She subsequently married chief conspirator James Hepburn, Earl of Bothwell and one of the few Scottish lords with a consistent record of supporting Mary and her mother. He had famously abducted her. Whether or not Mary and Bothwell planned the abduction so they could get married, or whether Bothwell kidnapped and went so far as to rape the queen to force her to marry him was hotly debated then and still is now.

The resulting rebellion ended with Bothwell fleeing the country* to Norway, subsequently being arrested by his estranged first wife; a Danish-Norwegian noble, and spending the rest of his life imprisoned in Denmark and Mary imprisoned in Loch Leven Castle. She was forced to abdicate the throne in favor of her son, the one-year-old, James VI (later James I of England) and after an unsuccessful attempt to regain the throne she fled to England seeking protection from her cousin, Queen Elizabeth I of England. Elizabeth, however, ordered her arrest, as she and her Protestant councilors (not entirely unjustifiably) considered Mary a focus for Catholic conspiracies against her rule. After nearly twenty years of imprisonment (Elizabeth was notably hesitant to condemn her), she was tried and executed for treason on the grounds of conspiracy to assassinate Elizabeth and place herself on the throne of England. Rather infamously, it took three chops to do the deed. And when the executioner lifted the severed head, it fell out of the red wig she was wearing. It then looked like her body was moving, and people thought she was refusing to die, only for Mary’s pet dog to run out of Mary’s skirts and start howling by Mary’s severed head.

Mary's life and character have been a matter of great dispute ever since her execution. She has been depicted by supporters of Elizabeth and the Protestant settlement as a murderous adulteress and Machiavellian Papist plotter, while those on the Catholic side often view her as a spotless martyr and the victim of Protestant treachery. She has, at any rate, been generally depicted as a beautiful, elegant, and wildly romantic woman.

Works associated with Mary of Scotland: