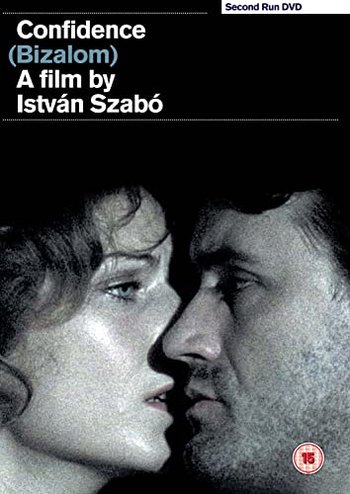 Bizalom (Confidence) is a 1980 film from Hungary directed by Istvan Szabo.

The setting is late 1944; the Red Army approaches but for the moment, Nazi boots are still on the ground in Hungary. One day a 30-year-old woman named Kata is walking home through the eerily deserted streets of Budapest when a man grabs her and yanks her into an alley. It turns out that 1) her husband is a member of the anti-Nazi resistance, 2) he has gone underground as the Gestapo is looking for him, and 3) Kata can't go home as the Gestapo is staking out her house and she'll get arrested. Kata, who had no idea her husband was in La Résistance, is shocked.

She is whisked to a hospital where the doctor is also a member of the underground. He reassures her that her husband and daughter are safe but that she won't be seeing either of them any time soon.After the doctor gives her false papers and a cover story, Kata is taken to a house in the suburbs. There she meets one "Janos Biro", a Resistance member who is also hiding out under a fake name, renting a spare room in the house of an elderly couple. For the duration of her stay, Kata will be pretending to be Janos's wife.