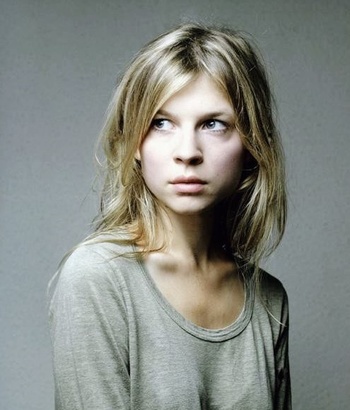 "Acting makes you look at life and try to understand it in a beautiful way."
Advertisement:

Clémence Guichard (born October 30, 1982 in L'Haÿ-les-Roses, a southern suburb of Paris), better known as Clémence Poésy, is a French actress and fashion model.

She is the daughter of actor-writer Étienne Guichard and a French teacher ("Poésy" is her mother's maiden name). She studied in various prestigious French acting schools, then chose to give her career an international flair pretty much right out of the gate, helped by her bilingual education that gave her a perfect pseudo-British accent, though she didn't forget her birth country and regularly performs there. Her Star-Making Role was Fleur Delacour in the Harry Potter films, starting with The Goblet of Fire.

She directed a short film in 2019, titled Le Coup des larmes. It was presented at the Venice Film Festival.