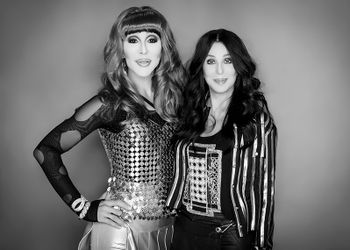 .
"I like to inject some reality into my Cher impersonation. You'll never see me go...[clicks tongue and flips hair] because Cher doesn't do that."
— Chad Michaels, legendary Cher impersonator and former RuPaul's Drag Race contestant
Advertisement:

Popular targets are Marilyn Monroe, Elvis Presley, Michael Jackson, and Cher. Bonus points if the impersonator is in drag.

A Sister Trope to Celebrity Resemblance (when characters say someone looks like one).