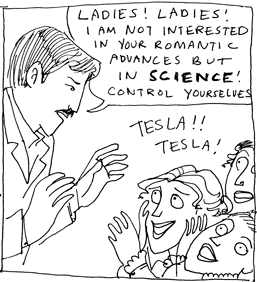 He just wants to show off his latest electrical wonder.
"Holmes is as inhuman as a Babbage's Calculating Machine, and just about as likely to fall in love."
— Arthur Conan Doyle, in a letter to Joseph Bell
Advertisement:

In Fiction Land, being very smart can damage your social prospects. This can hold particularly true in the area of sex and dating. However, this character doesn't care about driving off potential suitors with their intelligence or unusual interests. The Celibate Eccentric Genius knows that there are many more interesting and intellectually stimulating activities in this world than dating.

The Celibate Eccentric Genius is Exactly What It Says on the Tin - an intellectually brilliant, eccentric character who does not, in canon, engage in sexual or romantic entanglements. They may or may not be considered a potentially desirable partner by others, but to count as this trope, their celibacy must be, to some degree, voluntary - an eccentric genius who just can't get a date does not qualify.

Possibly due to the influence of Sherlock Holmes, these characters are usually introverts, often lack interest even in conventional social activities that don't involve the pursuit of romantic partners, and tend to suffer from Intelligence Equals Isolation.

These characters often lack a canonical sexual orientation, but are often perceived as Asexual or Aromantic by the fandom, or, for the ones involved in close same-sex platonic friendships, Ambiguously Gay. However, a heterosexual Celibate Eccentric Genius is possible.