Video Game / My Time at Portia 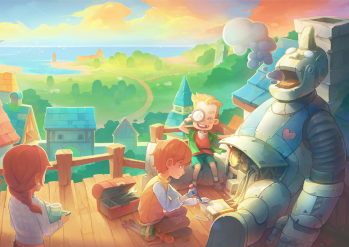 "How will you spend your time at Portia?"
"On the edge of civilisation... you inherited a workshop... made it grow... became a better builder... and made many, many friends... during... My Time at Portia"
Advertisement:

My Time at Portia is a Simulation Game with heavy RPG Elements, developed by Chinese developer Pathea Games, and published by Team 17 Digital. The game takes very heavy inspiration (self-admitted by the developers) from Marvelous' Rune Factory series, and to a lesser extent, Story of Seasons, albeit with a gorgeous Studio Ghibli inspired art style. Also, unlike the above two, which are primarily centered on farming, Portia is instead focused on Item Crafting, as the game puts the player in control of a Builder. However, crop harvesting and livestock raising are fully developed features, and the game has a major element of combat to it, as well as Dungeon Crawling.

The game is set on a post-apocalyptic Earth, albeit a heavily fantasized version, complete with Steampunk technology and mythical beasts. Centuries after a nuclear war has plunged the world into ruin, several agrarian civilizations emerged from the ashes, ready to begin anew. The game casts the player in the role of the child of a famous craftsman, who has inherited their father's decaying workshop after their father goes travelling. Immigrating to Portia from the city, the player joins the peaceful community, and its local Commerce Guild, aiming to make their mark on the world. Armed with your Pa's workshop handbook and workbench, you must gather, mine and craft your way to being crowned the number one workshop in the whole of Portia! Side activities include farming, fishing, mining, dungeon delving, and plenty of others, including a Social Sim of sorts; make lasting friendships, enjoy romantic dates star gazing, and embark on the adventure of marriage.

My Time at Portia was successfully Kickstarted

on October 11, 2017, and afterward the game entered Early Access on January 23, 2018, seeing a full PC release on January 15 the following year. The game was later released on April 18, 2019 for PlayStation 4, Xbox One, and Nintendo Switch.

In October 2019, Pathea Games announced that they were working on a sequel, My Time At Sandrock. Sandrock was eventually released in early access in May 2022, with a full release expected at some point in 2023. Sandrock is mostly in the same style as Portia, but the developers have stated that they have also taken some inspiration from Dark Chronicle this time around. Sandrock is also a Cowboy Episode for the franchise, set in a town suffering desertification, requiring water management and recycling scrap from the Old World to keep the workshop running.