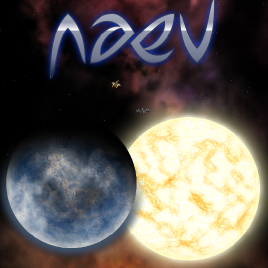 Naevnote pronounced somewhat like 'knife' or 'naive', not 'knave' (previously NAEV, or Not Another/Neutron Accelerated Escape Velocity, depending on who you ask) is a freeware PC game and an open-source Escape Velocity clone, set in an After the End scenario in which the sun has exploded in an event known as "The Incident" and created a vast, impenetrable nebula. With the loss of Earth, The Empire (founded out of The Federation) is shattered, unable to keep the Houses under control. Now it's every man for himself as Space Pirates run rampant despite everyone's best efforts.

Currently in development. To get more exposure, it was added to Steam Greenlight on September 2012, and in July 2017 Naev was released on Steam. It was then added to itch.io with the 0.8.0 release on December 2020.