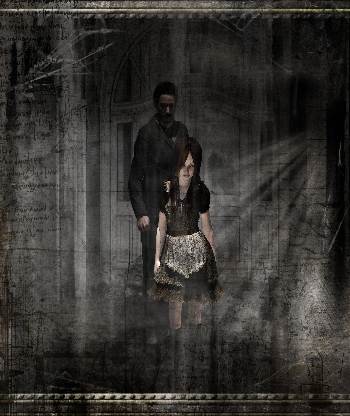 Only the very brave - or the very foolish - would enter Harborough Asylum.

is a Survival Horror RPG for PC, developed by Dark Gaia Studios (of One Night and Legionwood fame) and released in September of 2014.

Envisioned as a love letter to the Gothic Horror films of the early 20th Century, Mythos is the story of a famous paranormal investigator (whose name, background and appearance is decided by the player) tasked with uncovering the mystery of London's dreaded Harborough Asylum — a place rumored to be full of ghosts, zombies and other nasties. It is the player's job to search the asylum for traces of three missing university students, all the while fighting for their life against the Eldritch Abomination that has taken control of the grounds.

The game attempts to combine classic survival horror gameplay with the structure and mechanics of an old-school dungeon crawling RPG. There are stat checks, dialogue trees and non-combat proficiencies, but there are also jump scares, resource management and an emphasis on avoiding enemies which can decimate the party in a single encounter.

Like most adventure games, Mythos is best played without spoilers. Read the tropes below at your own risk.