"Indestructible? Do you mean immortal? Sheriff, do you have any idea what a Thompson submachine gun will do to 'immortal'?"
— Charlie Rakes 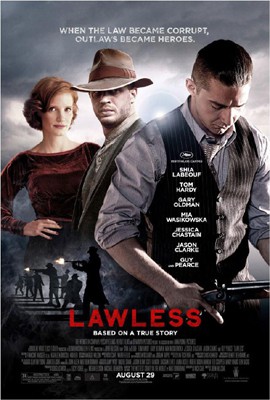 Lawless is a 2012 film set during the Prohibition era, and following the exploits of the Bondurants, a family of bootleggers. It is The Film of the Book The Wettest Country in the World, written by Matt Bondurant (the grandson and great nephew of the three brothers). Their steady work of selling moonshine in rural Virginia (with the compliance of the local sheriff) is complicated by two things; the arrival of Charley Rakes, an agent from the corrupt DA, who demands a cut of the local bootleggers' profits, and the youngest brother's ambition causing them to leave their comfort zone and take bigger risks.

It stars Tom Hardy as Forrest Bondurant, and Jason Clarke and Shia LaBeouf as his brothers Howard and Jack, with Guy Pearce as a Corrupt Cop trying to bring them down. Mia Wasikowska, Jessica Chastain, Dane DeHaan, Noah Taylor and Gary Oldman round out the cast. It was directed by John Hillcoat, with a screenplay by rock star Nick Cave, and a soundtrack by Cave and his bandmate, Warren Ellis.