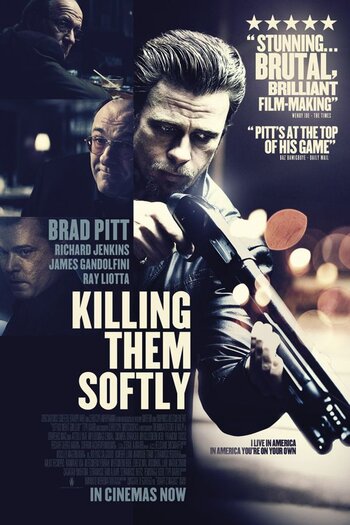 Don't rip off poker games. It's bad for business.
Advertisement:

Killing Them Softly is a 2012 crime film starring Brad Pitt, Ray Liotta, Richard Jenkins, and James Gandolfini, and written & directed by Andrew Dominik (who'd previously worked with Pitt on The Assassination of Jesse James by the Coward Robert Ford).

When a mob poker game run by Markie Trattman (Liotta) is held up by two masked gunmen, suspicion immediately falls on Trattman. And with good reason: years ago, he'd actually ripped off his own game, then drunkenly copped to it - to the amusement of his fellow wiseguys. This time, feeling that not punishing the robbers would be bad for business, hitman Jackie Cogan (Pitt) is called in. Although Jackie deduces almost immediately that Trattman isn't stupid enough to hit his own game twice, he still decides to make an example of Trattman. Jackie also quickly uncovers the real culprit — but since they actually know each other, he decides to subcontract that hit to Mickey (Gandolfini), who turns out to be a bitter drunk more interested in working his way through every prostitute in town.