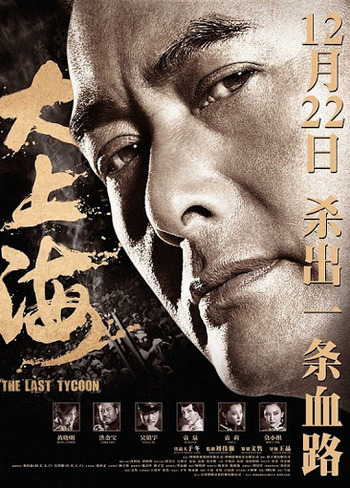 The Last Tycoon is a 2012 Hong Kong film directed by Wong Jing, starring Chow Yun-fat, Sammo Hung, Francis Ng and Huang Xiaoming. It is loosely based on the life of Du Yuesheng, a Shanghai mob boss.

In a small Chinese town in the 1910s, a young man, Cheng Daqi, is framed for a murder he did not commit. He escapes from the prison with the help of Mao Zai, a military officer who was in jail with him. Daqi has to flee to Shanghai, where he becomes a mobster, while his love interest, Ye Zhiqiu, goes to Beijing to become an opera singer.

Not to be confused with the unfinished final novel by F. Scott Fitzgerald, or its film and television adaptations.

The Last Tycoon provides examples of: