The Gentleman or the Scoundrel 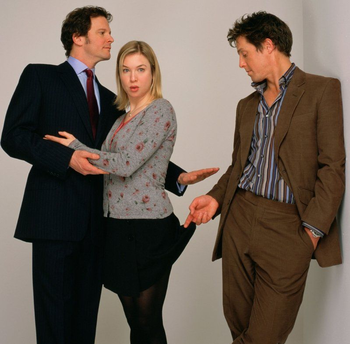 The male choices in female-centered love triangle usually comes with two archetypes: the kind-hearted, safe Gentleman and the edgy, dangerous Scoundrel. The Gentleman is a good guy: honest, upright, and noble. The Scoundrel is an outsider to the heroine's world (most of the time), dangerous and wild. It is a love triangle between a heroine and Noble Male, Roguish Male: a man who is safe versus a man who is exciting.

The Gentleman is likely someone the heroine has known previously, the kind of man who represents the safety of her youth and home. The Scoundrel has a dangerous spark that attracts her into his world. That kind of danger is usually emotional in nature—the heroine risks a wild and unstable relationship with him, especially in contrast to the relative dependability of the Gentleman. Parents will favor the Gentleman and discourage dalliance with the Scoundrel, regardless of personality.

A discretionary angle features the heroine committing to a lifestyle via a man: choosing traditionalism vs passion or lasting happiness vs transient excitement. In these cases, one of the two men will almost always have a clearly undesirable personality. If the poorer character seems to fit the patterns of Gentleman better (or vice versa), the trope is Rich Suitor, Poor Suitor.

Unlike with Betty and Veronica, the heroine often chooses early or midway into the story, and who she ends up with is usually dependent on the length of the work and how early she made a choice. If a choice is made very early, the heroine is more likely to end up with with that first choice after several setbacks with him. If the choice is made mid-way, then it was the Wrong Guy First. Otherwise be prepared for a while of agonizing UST and Will They or Won't They?.

Bear in mind that not every love triangle with two men is going to fit.