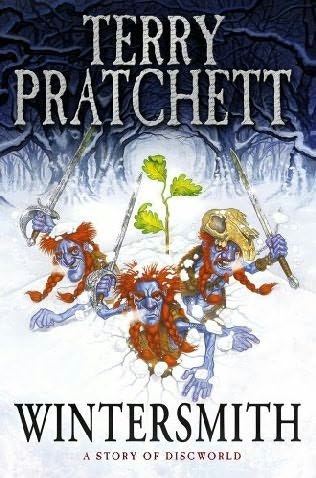 At nine, Tiffany Aching defeated the cruel Queen of Fairyland. At eleven, she battled an ancient body-stealing evil. At thirteen, Tiffany faces a new challenge: a boy. And boys can be a bit of a problem when you're thirteen...But the Wintersmith isn't "exactly" a boy. He is Winter itself-snow, gales, icicles-all of it. When he has a crush on Tiffany, he may make her roses out of ice, but his nature is blizzards and avalanches. And he wants Tiffany to stay in his gleaming, frozen world. Forever. Tiffany will need all her cunning to make it to Spring. She'll also need her friends, from junior witches to the legendary Granny Weatherwax. "Crivens!" Tiffany will need the Wee Free Men too! She'll have the help of the bravest, toughest, smelliest pictsies ever to be banished from Fairyland-whether she wants it or not. It's going to be a cold, cold season, because if Tiffany doesn't survive until Spring...Spring won't come.
The 35th
Advertisement:
Discworld novel and the third in the Tiffany Aching theme.

It's been two years since the previous Tiffany Aching book. Tiffany has moved on to study under a new witch - this time Miss Treason, who is ancient (she claims to be 113 years old) and creepy as heck. Miss Treason takes Tiffany to see the Dark Morris, a tradition to welcome the winter. Tiffany, unfortunately, feels compelled to step in and join the dance, attracting the attention of the titular Wintersmith, the embodiment of Winter itself, in the process.

This is the only Discworld novel to have its own soundtrack, produced by English folk band Steeleye Span.

Preceded by Thud!, followed by Making Money. Preceded in the Tiffany Aching series by A Hat Full of Sky, followed by I Shall Wear Midnight.