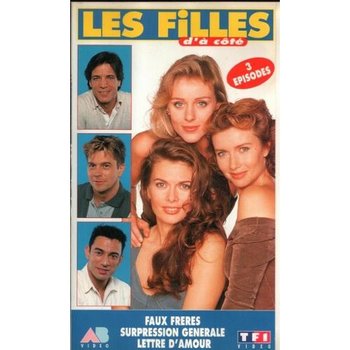 Les Filles d'à côté note The Girls Next Door was a sitcom that screened on French television till January 1995. In its original format with its first cast it ran for a total of 170 episodes. The format was revived later in 1995 with a largely new cast under the title of Les Nouvelles Filles d'à Côté, and ran for a further 156 episodes. Re-runs still appear to be popular today on French TV channels.

The show followed a tried and trusted TV sitcom formula, following the lives of two groups of unattached thirtysomethings who rent neighbouring apartments in a communal shared block. Daniel and Marc are already flat-sharing; they get as neighbours three old friends, all divorcées or separated from partners, who have decided to pool their resources and share a place together. The three "girls" (all look to be in or approaching their thirties) duly move in next door. They introduce themselves as Fanny, Magalie and Claire. Hilarity Ensues. Marc is immediately smitten and can't decide which of the three girls he wants to pursue (he finally settles on Magalie, who wants nothing to do with him). Meanwhile the girls (ignoring or avoiding Marc) are all taken with the debonair and sophisticated American photographer Daniel. Who politely turns down their interest as he has a girlfriend elsewhere. And downstairs in the basement is a gym and health club for which all residents are automatically members. A key person here is Gérard, who practically runs the place. A likeable Camp Gay, he becomes a sort of best friend and confidant to the girls. Secondary characters include Vincent (brattish teenage son of Claire) and Wendy (precocious six-year-old daughter of Fanny). And upstairs there is Georgette, who is in love with Marc.