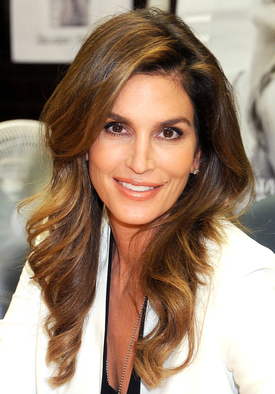 Famously bright (she graduated as valedictorian of her high school) and commercially minded, she could have gone on to study chemical engineering at college but chose to pursue modelling as a career, becoming hugely successful — in the late 1980s and '90s in particular — and, unlike many models, popular with both ladies and gentlemen (albeit for different reasons). Cindy was hired by MTV to front House of Style from 1989 to 1995, and in 1992 she released the fitness video Cindy Crawford: Shape Your Body (thus paving the way for Elle MacPherson and Claudia Schiffer to do similar tapes). Though criticized by experts, the tape was highly successful and led to the following year's Cindy Crawford: The Next Challenge.

She married Richard Gere in 1991, but the marriage came to an end four years later following personal differences (not helped by a famous newspaper ad taken out by the couple in The Times). Her second marriage in 1998, to longtime friend (and ex-model) Rande Gerber, subsequently produced two children (son Presley in 1999 and daughter Kaia in 2001 - both of whom have gone into modelling). She later produced two more fitness tapes: Cindy Crawford: A New Dimension (2000, aimed at women looking to reduce weight after giving birth) and Mini-Muscles with Cindy Crawford and the Fit-Wits, a shorter animated tape (with a live-action intro from guess who) aimed at children.

Cindy is also a dedicated supporter of cancer research, having lost her only brother Jeffrey to leukemia when he was four.

She is also, according to her Twitter page, good at bowling