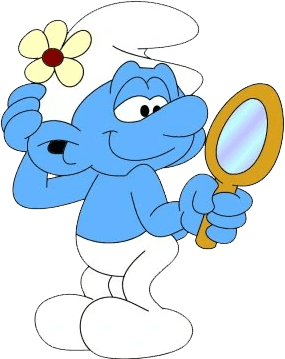 Don't hate him because he's beautiful.
"Vanity, thy name is woman."
— Hamlet (sort of)
Advertisement:

The notion that vanity (in the specific sense of being preoccupied with one's physical attractiveness and desirability to others) and femininity are intrinsically linked: to be feminine is to be vain and to be vain is to be feminine. A woman who is not vain (and preoccupied with how beautiful others perceive her as) is not fully feminine, while a man who is vain is not fully masculine, quite possibly a weakling or homosexual. Handsome men are often described as "ruggedly good-looking," emphasizing their lack of attention to presentation.

When it comes to characterizing women, this trope takes three basic forms, although sometimes there is blendover.

The implications of this trope tend to be equally nasty when applied to men, where having such a feminine vice implies that this character is "not a real man." The audience may get a chuckle out of a manly man evaluating his Perma-Stubble in a store window, but a consistently and overtly vain man is a joke. He will be foppish, cowardly, and quite possibly gay (especially in a narrative that assumes rugged heterosexuality is the default male state). The Sissy Villain owes much to this trope. On the other hand, Drag Queens typically embrace the trope, and have no end of fun making jokes about how well it fits "girls" like them.

The trope's premise in any incarnation is the polar opposite to the concept of metrosexuality, and its popularity has waned as morals change and gender stereotypes are discarded, but it is not yet a Dead Horse Trope.

Alternative Title(s): All Women Are Vain