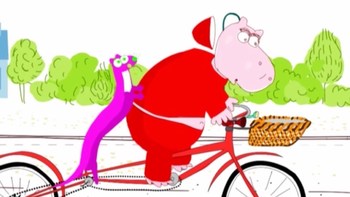 Hip-Hip and Hurra is a Polish animated series created by Elżbieta Wąsik and produced by Studio Miniatur Filmowych.

The series centers around a duo of Clueless Detectives, a pink hippo named Hip-Hip and a purple weasel named Hurra. Most of the mysteries the characters solve center around lessons about nature's phenomena.

While targeted for very young children and very educational at heart, it includes humor intended for adults as well and often focuses a lot on the comedy. The series consists of 26 episodes. Outside of Poland, the show got popular in Argentina as well in Hungary, Portugal and some other countries.