Film / Cat-Women of the Moon 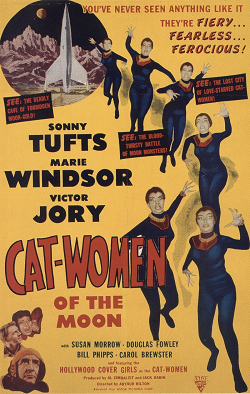 Mankinds' first expedition to the Moon courts disaster by including a woman in the crew.

Well there's more to it than that, but not much. Part of the Lady Land subgenre of sci-fi cheapies (see also Queen of Outer Space and Fire Maidens of Outer Space) in which an Interplanetary Voyage leads to the discovery of an all-female society on another world. Rather than using this premise to explore gender politics of the time, we instead get fanservice and the restoration of a reassuring sense of male patriarchy by the end.

What were you expecting — rocket science?

It recieved a 1959 remake titled Missile to the Moon.

Cat-Women of the Moon provides examples of: