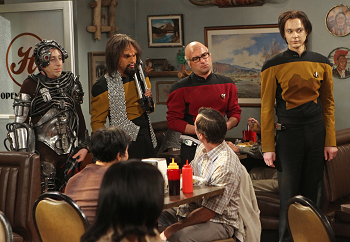 "You know, before I answer any more questions there's something I wanted to say. Having received all your letters over the years, and I've spoken to many of you, and some of you have traveled... y'know... hundreds of miles to be here, I'd just like to say... get a life, will you people? I mean, for crying out loud, it's just a TV show! I mean, look at you, look at the way you're dressed! You've turned an enjoyable little job, that I did as a lark for a few years, into a colossal waste of time! I - I mean, how old are you people? What have you done with yourselves? You, you must be almost 30. Have you ever kissed a girl? I didn't think so. There's a whole world out there. When I was your age, I didn't watch television, I lived. So move out of your parents' basements, and get your own apartments, and grow the hell up! I mean it's just a TV show, damn it. It's just a TV show!"
— William Shatner, Saturday Night Live
Advertisement:

There are a lot of different ways to make a character into a nerd, from making them interested in science, giving them Nerd Glasses, or removing all social capabilities whatsoever. But all you really need to do is add one small characteristic: an interest in Star Trek. In fiction, only geeks like Star Trek, and all geeks like it. Those who are particularly obsessed are called "Trekkies".

Star Trek: The Original Series was a television show from the 1960s that had quite a few movies and spinoffs afterward (see the page for more details). It developed one of the earliest cult classic television followings and its fans were always regarded as a little "out there" due to their devotion. Nowadays that sort of dedication is not strange at all and it's relatively common for a fandom to give its more intense fans nicknames (such as bronies or twihards). Regardless, Trekkies are still remembered above all the others.

This is a relatively widespread stereotype, although realistically not everyone interested in Star Trek is automatically a Trekkie, or even a nerd at all, and not all nerds have to like the show. But in fiction, all nerds are Trekkies, all Trekkies are nerds, and nobody just likes Star Trek — if you like it, you love it.

Outside of the US, fans of other shows are sometimes substituted in the role — especially if there is a major locally-produced sci-fi franchise that can serve as an equivalent (such as Doctor Who in Britain or Gundam in Japan).

Note that there are examples of characters who are in no other way considered nerds (although many are still losers), but may still show their inner geek with an interest in the show.

See also Geek Reference Pool and Small Reference Pools. Often overlaps with Nerds Speak Klingon. And see also Fan Community Nicknames if you're curious as to what other fans of different fictional work call themselves.

Also compare Otaku, which shares many similarities to Trekkies.