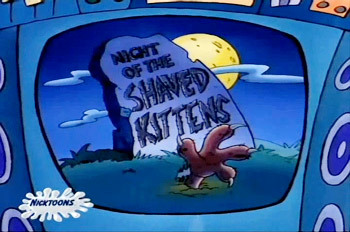 "You! You're not Sylvia! You're one of the Kung-Fu Creatures On The Rampage! Two!"
— Garfield and Friends

A lot of the time, characters are shown watching stereotypically "bad" movies with titles like The Curse of ______ or The Attack of ______. This is possibly to keep the focus on the title characters and prevent a Show Within a Show from developing, or simply because the writers themselves enjoy that kind of movie. More recently, though, it may be because so many of the pre-1964 B Movies have fallen into the public domain and can be used as a Show Within a Show without triggering any copyright concerns.

One of the biggest reasons writers do this, though, is that it can serve as an easy shorthand for a character's cultural values (or lack thereof). If a characters is depicted as enjoying old B-movies, it is usually meant to indicate to the audience that they are low-brow and uncultured. These movies are notorious for being So Bad, It's Good, so the typical logic goes that anyone who enjoys watching them must have low standards for what constitutes a "good" movie. If you want to cement your character's status as an outcast from normal popular culture, having him or her be a fan of old B-movies is a common way to do it.

It also helps that typically B-Movies are Exactly What It Says on the Tin. For example, a more "cultured" movie title like Citizen Kane doesn't immediately tell you that it is a mystery-drama about a deceased man's life. Whereas if the characters watch a movie titled "Killer Lobsters from Planet X", you know what to expect and don't have to spend much time elaborating on what they are watching, so that the story can move on.

May be a case of Stylistic Suck, especially if the B-movie doesn't actually exist outside the world of the characters. Revenge of the Sequel may ensue. Sister Trope to Saw "Star Wars" 27 Times, when a character's unabashed fandom of these movies involves numerous repeated viewings. See also Gory Deadly Overkill Title of Fatal Death.