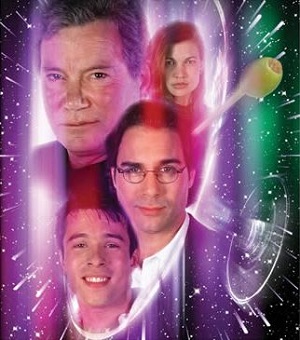 Love long and party!
William Shatner: I'm not really here. I'm one of the top ten imaginary friends kids have. Just behind John Travolta, Reggie Jackson, and Farrah Fawcett-Majors.
Mark: Do you wish Rhett never loved Scarlett? Rick didn't have Ilsa or Harry never met Sally? Someone once said it's better to have loved and lost than never to have loved at all. Succeed or fail, we must make the attempt, it's our nature. Now if it were up to me, as it usually is, I would order this. But its not. Because Claire is right in pointing out the enormous danger potential in any relationship with a man as intelligent but fantastically flaky as Robert. But I must point out the possibilities, the potential, for true love and happiness are equally great. Risk... risk is our business. That's what relationships are all about. That's why we're out there.
Advertisement:

Mark is a high-strung magazine editor who has no luck with women. His friend Rob has plenty of luck, but he can never keep them around due to his propensity for spending the rent money on special limited edition action figures and first edition Sandman comics. They're pushing 30 and starting to wonder if they'll ever find true love.

One day they bump into William Shatner at a bookstore and strike up a friendship. At first they expect Shatner will be able to give them advice and life and love, but they quickly realize that he's just as screwed up as they are.