Literature / Night of the Living Trekkies 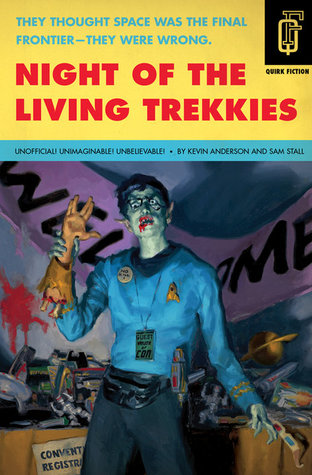 This actually looks scary. And despite this book being an obvious parody of a particular genre and a specific fanbase, we are not joking about how scary that cover looks.
Advertisement:

Night of the Living Trekkies by Kevin David Anderson and Sam Stall adds a new twist to the usual Zombie Apocalypse story by throwing a bunch of Genre Savvy Star Trek fanboys into the mix!

This is not your typical Zombie Apocalypse. It's been blatantly stated that "This is an original work of fiction, horror, and parody. and is not officially sponsored by, affiliated with, or endorsed by the owners of the Star Trek® brand."

Jim Pike is an ex-Trekkie and Afghanistan war vet. Now discharged, he runs a hotel that gets overrun by Star Trek fans when a convention rolls into town. However, things things quickly go south when a strange virus causes many of the fankids to turn into flesh-eating monsters! Jim and a small group of fan kids now have to find their way to safety!

A trailer for the book can be seen here