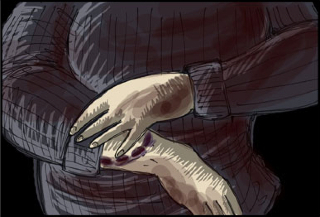 I... I wasn't bitten... Really, I wasn't! You have to believe me...
Ed: What's up with your hand, man?
Pete: I got mugged on the way home from work.
Ed: By who?
Pete: I dunno, some crackheads or something. One of them bit me.
Ed: Why did they bite you?
Pete: I don't know, I didn't stop to ask them!
— Shaun of the Dead
Advertisement:

A Zombie Apocalypse is no fun for anyone; even the zombies are incapable of feeling fun. It's especially hard for the Zombie Infectee; carelessly bitten by a zombie or infected with an early stage of The Virus, they're in for a slow and painful transformation into a monster that will kill or convert their friends and loved ones. The only way out is death, either by suicide or mercy kill, and any miracle cure or even Heroic Willpower is right out the window if you aren't a main character.

So what's a Zombie Infectee to do? Nothing. No, seriously. Any group trying to survive in this apocalyptic situation will always have at least one idiot Jerkass who gets bitten or scratched and refuses to face the truth (traumatic as it is) and tell anyone, knowing full well their silence will cost lives. They don't seek help because they know there is nothing for their condition but a bullet to the head. They tend not to take steps to make sure they at least don't endanger others once they die. A Heroic Sacrifice is the last thing on their mind, and trying the Vampire Refugee route is suicidal in most cases.

The Zombie Infectee is almost certainly (and, in their defense, rightfully) afraid their friends will kill them in cases where the protagonists have figured out that a bite or scratch will pass on The Virus. Fear of discovery means they live their now shortened lives terrified and in denial, and as a result they end up behaving irrationally because of it. Alternatively, they will desperately cling to the hope that they will be the one person immune to The Virus, despite it so far having a 100% fatality and 100% conversion rate — in the most headstrong cases, they may try to Resist the Beast.

At this point, the onus, unfortunately, is on the heroes to notice the erratic behavior (for a Zombie Apocalypse, anyway) and take the appropriate and necessary steps. Other people — friends, relatives, lovers — may also sink into denial and try to hinder the heroes from dispatching the walking liability before s/he becomes the walking dead. When they do turn, the Zombie Infectee will almost always infect or kill at least one unsuspecting victim (often the Zombie Advocate, for additional tragic irony), unleash the horde of zombies, destroy all the ammunition, or find some other way to cause a really bad day for the remaining survivors.

Note: A few zombie works (movies, literature, etc.) have taken a third option, so to speak. If the point of infection is near the end of a limb (which it often is), that limb can then be removed, a literal Life-or-Limb Decision. The person may die due to shock and blood loss anyway, but at least he's not getting back up again to snack on your brains. Hopefully.

Obviously, much of this page talks about works in which a Zombie Infectee is kept a secret even from the audience, and thus learning the identity of one prior to experiencing the work would ruin a somewhat major twist. Beware of spoilers from here on.

See also And Then John Was a Zombie and Vampire Refugee. Compare and contrast Secret Stab Wound and Mortal Wound Reveal. Most examples are also Secretly Dying.

Wall-nut is bitten by a zombie and Sunflower asks Peashooter to shoot him.

Wall-nut is bitten by a zombie and Sunflower asks Peashooter to shoot him.