Series / In the Flesh 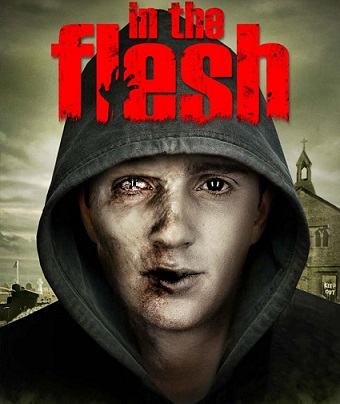 "I am a Partially Deceased Syndrome sufferer, and what I did in my untreated state was not my fault."
—Undead Mantra
Advertisement:

In the Flesh is a 2013–14 BBC series consisting of three episodes (Season 1) and six episodes (Season 2); set after a Zombie Apocalypse, zombies have changed attempting to integrate into a society ravaged by their initial slaughter.

Series 1 is set three years after the dead rose from the grave. It follows Kieren, a Partially Deceased Syndrome (PDS) sufferer, who is ready to return home. However his unlife is far from easy; suffering from flashbacks before his treatment and hounded by the Human Volunteer Force (HVF) he's stuck at home wallowing in the past. His parents are in denial while his sister, a member of the HVF, is more than slightly hostile towards him.

Series 2 sees Kieren's unlife improved for the better; family and friends accepting, local community less hostile, part-time job and an extended stay in mainland Europe on the horizon. However battle lines have been drawn between two extremist parties; the terrorist/cult Undead Liberation Army (ULA) and far right political party Victus, once again throwing the delicate balance of peace of Roarton into disarray.

Now has a character page in desperate need of wiki love.

In the Flesh contains examples of: