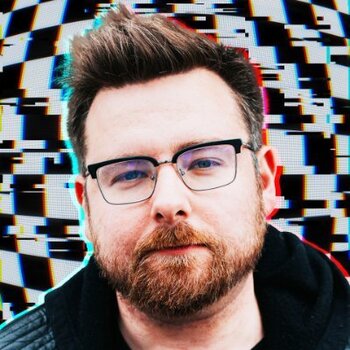 "Hey, you! My name is Thomas "TomSka" Ridgewell."
Advertisement:

He also gained prominence as a part of Eddsworld, voicing an Author Avatar character named Tom and, after Edd Gould's passing, working as the series' main showrunner. He eventually departed from the role in 2016, finishing his tenure with the two-parter "The End", after which he passed control over the series to Gould's family alongside Matt Hargreaves. He also served as one of the executive producers on Don't Hug Me I'm Scared from episode three onwards.

He also made a game called KatataK (its name derived from "cat attack") which was available on iOS and Android.

His short film Hit It has its own page, as does his animated series Crash Zoom and his comedy challenge series Try Hards.

Tropes present in his works or otherwise related to him:

Whilst reviewing asdfmovie sketch ideas sent in by fans, Tom loses it upon receiving a particularly crude looking strip.

Baby With A Gun

Whilst reviewing asdfmovie sketch ideas sent in by fans, Tom loses it upon receiving a particularly crude looking strip.

Baby With A Gun