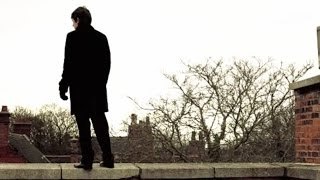 Matt: What are you doing up there?
John: Well...I was going to commit suicide.
Matt: Oh. (beat) Any chance you could not do that?

is a 24-minute Short Film directed and co-written by Thomas Ridgewell, better known as TomSka of asdfmovie fame, released in November 2012 as Tom's final project for the University of Lincoln. The film was released after going through a re-filming after the original version was lost alongside about 3,500 pounds worth of stuff that was in a bag Tom left on a train

The film is based around a man named John about to jump off a building but being stopped by a Wide-Eyed Idealist (at least, for the time being) named Matt. After getting John off the ledge, Matt takes him to a bar where John recounts the full story of how he wound up on that ledge.